The share of renewable energy generated by offshore sources globally is low, and dominated by offshore wind. This is a product of the relative infancy of the many offshore renewable technologies coupled with very low investment levels when compared with conventional renewable sources. According to a report by Bloomberg of the approximately 300 billion invested in renewable energy in 2015, only about 200 million or less than 0.1%, was spent on marine renewables. The graphic below shows the breakdown of 2015 investment. These numbers do not represent the total spend by these sectors, it is the Bloomberg estimate of investment, but they do show the level of support for each industry. 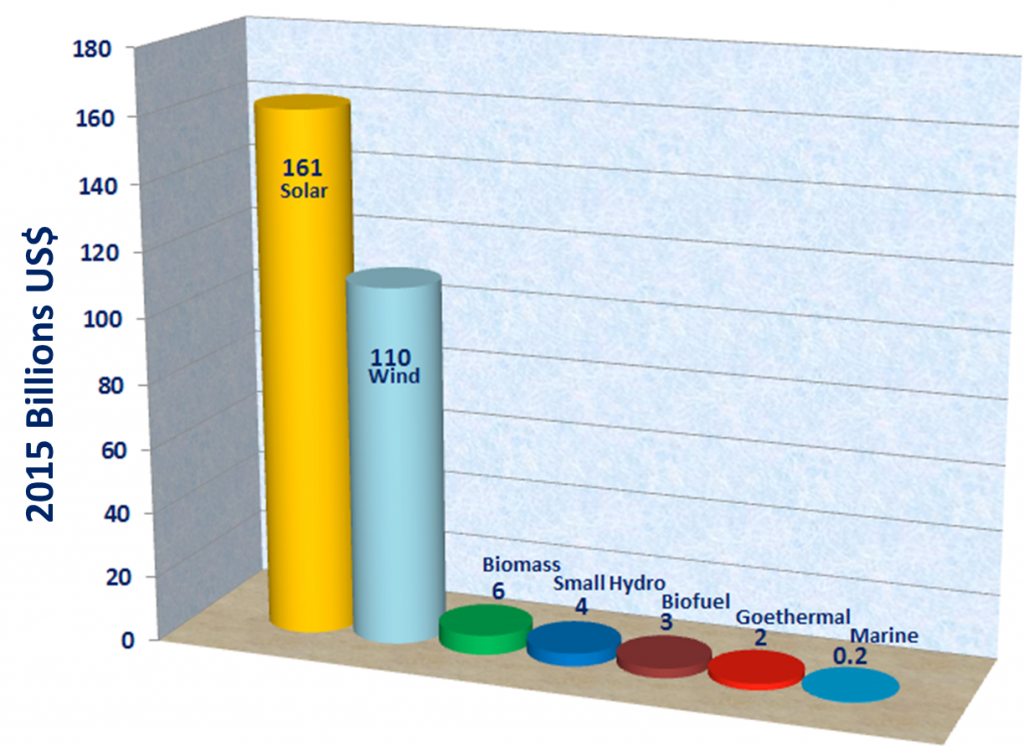 Working offshore is expensive and has inherent physical challenges that onshore systems do not, but commensurate with that risk is the potential for high rewards. Per the United States Bureau of Ocean Energy Management (BOEM) and the National Renewable Energy Laboratory (NREL) in the US alone offshore renewables have the following amount of resource available if it could be economically captured:

That is more than four times the estimated global energy consumption of 185 TkWh projected for 2020 available in just the US waters.

The expected cost of an Excibuoy is given below. Initially the capital costs will be high, but because of our design and build policies that put great value on repeating the previous build we expect to reap the rewards of lessons learned over time.

A prototype anything will have unexpected issues and complications; this is doubly true of offshore systems. Excipio have allowed for this in our schedule and cost estimates, and Excipio has a unique way of greatly reducing our exposure to these risks. Our prototype Excibuoy will be full sized, fully functional, and based on an analysis of our likely project portfolio. This will allow us to apply a continuous improvement management technique called Incremental Design Optimization (IDO), mass-manufacturing Excibuoys, not custom building them as a series of one-offs.

Taking a similarly complex example, Boeing spent 5 years building the first Dreamliner at a cost of billions. They now sell 80+ per year at a cost less than $120 million each. The plane did not get less complex, but Boeing is reaping the benefits of lessons learned. Until the Excibuoy prototype is built the cost per unit is difficult to predict, but it is certain that by serial number 10 it is realistic to expect the cost per kilowatt-hour to be 25% of the prototype. Our corporate objective is an Excibuoy that is profitable at $0.07/kWh because we feel that just because its renewable energy does not mean it can’t compete with traditional power plants.

Once it is truly commercial ORE will have more in common with airplane manufacturing than oil and gas, in that it will be a highly complex assembly line process, producing hundreds or thousands of identical units a year.

Excibuoy™ Space: Excipio reviewed more than 500 offshore renewable companies to determine best practices; who the likely competitors would be; and which technologies would be included in the Excibuoy™. Of those companies only 10 have proposals for integrated platforms. In 2 cases the integration consists of putting tidal devices beside a shallow water fixed wind tower. The 8 floating concepts are either wind/wave or wind/current machines. No company is actively trying to develop a platform integrating all the available offshore renewable technologies as Excipio intends to do.

Oil and Gas Support: There are several companies providing renewable energy to offshore oil facilities, but only low power (maximum 100 kW continuous) used for incidentals. No system in service provides enough power for even 1 subsea pump. A rule of thumb is 10MW per subsea well as a minimum.

Excipo Management: There are some very knowledgeable and experienced people working on offshore renewable energy; but they do not always have offshore development backgrounds. Not only do the Excipio team have those skills, they are all senior subject matter experts with global experience. It is this experience that led Excipio to focus on the Gulf of Mexico as a high value resource and to conclude that combing offshore oil and gas with renewables would provide a financial boost to the technology.

Technology/Innovation: Excipio’s talent is integration and project management. We do not own IP, we use IP. Many, if not all, of the companies in our consortium were not aware of the other companies or their capabilities prior to our involvement.

In the World of Green Energy
Excibuoy™ is Cost Competitive 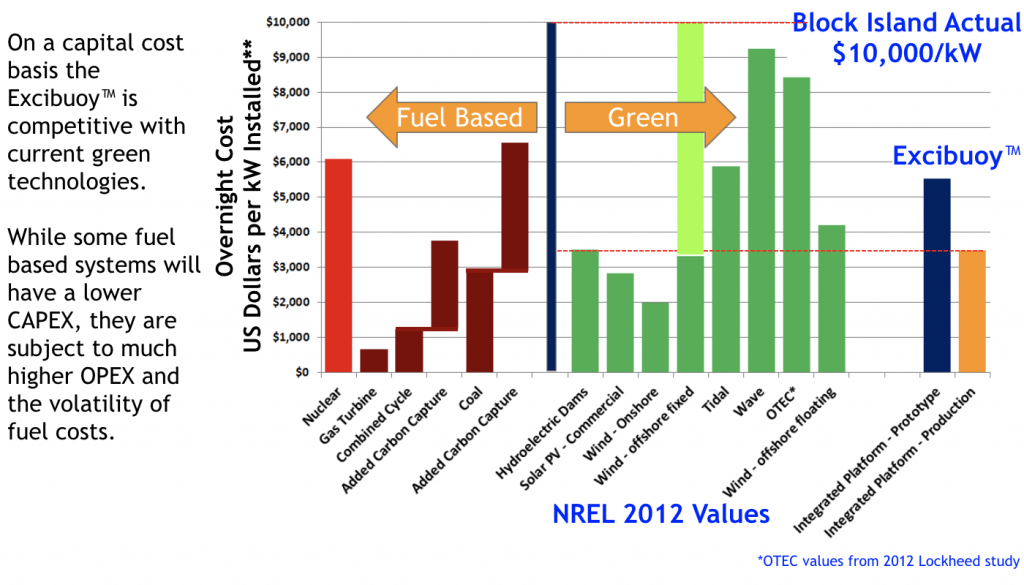